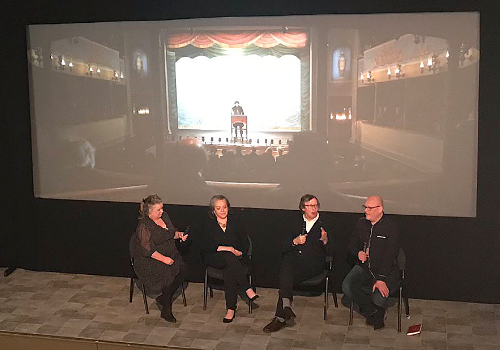 By kind permission of Armando Iannucci and Lionsgate UK, Theatre Royal was given permission to host two screenings of The Personal History of David Copperfield as a fundraising event at the theatre, where some of the scenes had been filmed during the summer of 2018. We were even lucky enough to have some of the production team from the film come down for pre-show drinks and a reception and a post-show talk! We were joined by Location Manager Harriet Lawrence, Producer Kevin Loader and Designer Cristina Casali. The evening was a huge success and enjoyed by all. The team loved the theatre and the area and we couldn’t be more grateful for their support.

Here’s what the Location Manager said:

“We started scouting locations in the cold February of 2018. Cristina Casali, the designer and I started putting together the building blocks of the whole film. We knew we wanted something different, not just the usual obvious locations. It had to ooze character and East Anglia. The film is loosely set around 1840 so we decided to look at one of the very very few pre-Victorian Theatres. The Theatre Royal in Bury St Edmunds is probably the best example. In addition, it also has a gorgeous Coaching Inn – The Angel Hotel.

When making an independent film, we need to maximise any travel time outside our base; we were really excited to find the best Theatre, and the best Coaching Inn was in a town which also had streets of stunning unspoilt Georgian architecture. We knew we were on to a winner and it made it much easier to persuade the producers that Bury was an all-round package.

We spent a month or so following our nose, meandering around mostly Norfolk and a bit of Suffolk, immersing ourselves in books and locations, trying to imagine what David Copperfield’s childhood was like nearly 180 years ago.

Armando was keen to have many transitions and theatrical visual devices in-camera as possible, rather than rely on Visual Effects and CGI. Cristina and our Director of Photography Zac worked on many of them including backdrops falling away and revealing the next scene. Shooting in The Theatre Royal really helped draw us into the mechanical world of smoke and mirrors and was the perfect theatre for this film.

By the time we came to film 6 months later, it was the hottest day of the year (or nearly) We only actually filmed in Bury for 3 days (2 in the theatre, and 1 on the streets) but we really made the most of it; Bury shines and the Theatre quite rightly bookends this wonderful version of David Copperfield.

The actual shoot at the theatre was a joy. All the team were unbelievably helpful and supportive making it such a pleasure for my team, and the rest of the crew. To come back and see the film in the theatre was a real pleasure.”